United Workers knows that a mass movement of poor people, led by the poor, is the only answer to the evils of racism, poverty, militarism, and ecological devastation.  On June 18th, we took a big step in growing that movement together.  We brought over 100 of our base to join the thousands from across the country that gathered for the mass assembly in D.C. In our band of unlikely brothers and sisters included members who are homeless and surviving in shelters, senior citizens and grandkids, leaders who committed themselves to bringing their neighbors, family and co-workers.

We could see on our buses traveling to D.C. in the early morning and in the thousands that greeted us on the national mall, what Dr. Martin Luther King called a “new and unsettling force” that would be needed to shake this nation from complacency and usher in lasting change.

As we were reminded on June 18th this was not about a day but a declaration of commitment to the long struggle ahead. This summer, United Workers will be embarking on an historic challenge of organizing across lines of division as we grow statewide, crossing boundaries of race, geography and culture. We look forward to sharing more about our summer outreach plans in upcoming e-alerts.

Included in this e-alert we will share a reflection on June 18th from Mike Hughes, a MD Poor People’s Campaign leader from Western Maryland, a video created by the United Workers Media Team capturing the day, and finally our third installment of “Learning As We Lead:” 20 Years of United Workers.

On the weekend of Juneteenth 2022, the Poor People's Campaign gathered for a Moral March and Assembly, in Washington, DC. People arrived on buses from around the country, many to share their testimonies of struggle and survival. On stage, the theomusicology team was in force with a full gospel band and choir, stirring the crowd of several thousand with songs from the movement.

"There is power in our stories," said one testifier, asking the crowd to close their eyes and imagine, "What would America look like?"

Another testifier talked of the shame they experienced growing up LGBTQ+ and how they wondered "if being myself was worth it? How can my existence be a threat?"

Other testifiers talked about how "incarcerated lives matter too." How they made mistakes, but they are not a mistake, crying out, "I too am America."

With the capital behind him, Bishop Reverend William Barber called for a Third Reconstruction Agenda, denouncing the politics of greed that leads to policy murder, calling it a moral crisis in America. "There comes a time," he proclaimed, "when we must have a moral meeting ... and we won't be silent or unseen or unheard anymore." He then spoke of building a fusion coalition of the rejected, the outsiders, of those at the bottom, to build a non-violent, moral army, announcing, "We are not an insurrection, but we are a resurrection."

Those words, "not an insurrection, but a resurrection," inspired me. My name is Mike Hughes. It was during the COVID lockdowns and the mass demonstrations protesting the murder of George Floyd that I first became aware of the Poor People's Campaign. Watching a PPC rally on television, much like this year's event, was where I first became involved, texting the number to sign up.

I live in Western Maryland with my wife and I’m the proud parent of four children. My wife and I are both disabled. Though our disabilities are hidden, they affect every part of our lives. I have autism. And my wife has heart failure, along with auto-immune disorders which force her to live in chronic pain. I am able to work. My wife is not. Our experiences have made me see how fragile life can be, how we're only a couple of bad weeks from financial disaster.

Seeing the attack on our capital on television was one of the most traumatic events I've experienced as an American. "So it's come to this," I remember thinking. Since then, the efforts by red states to enact laws to suppress voting have intensified, trying to limit the vote to only the "real" Americans. Today's march, however, declared that ALL AMERICANS ARE REAL AMERICANS, that all voices deserve to be heard, again, like Rev. Barber said, "we won't be silent or unseen or unheard anymore." 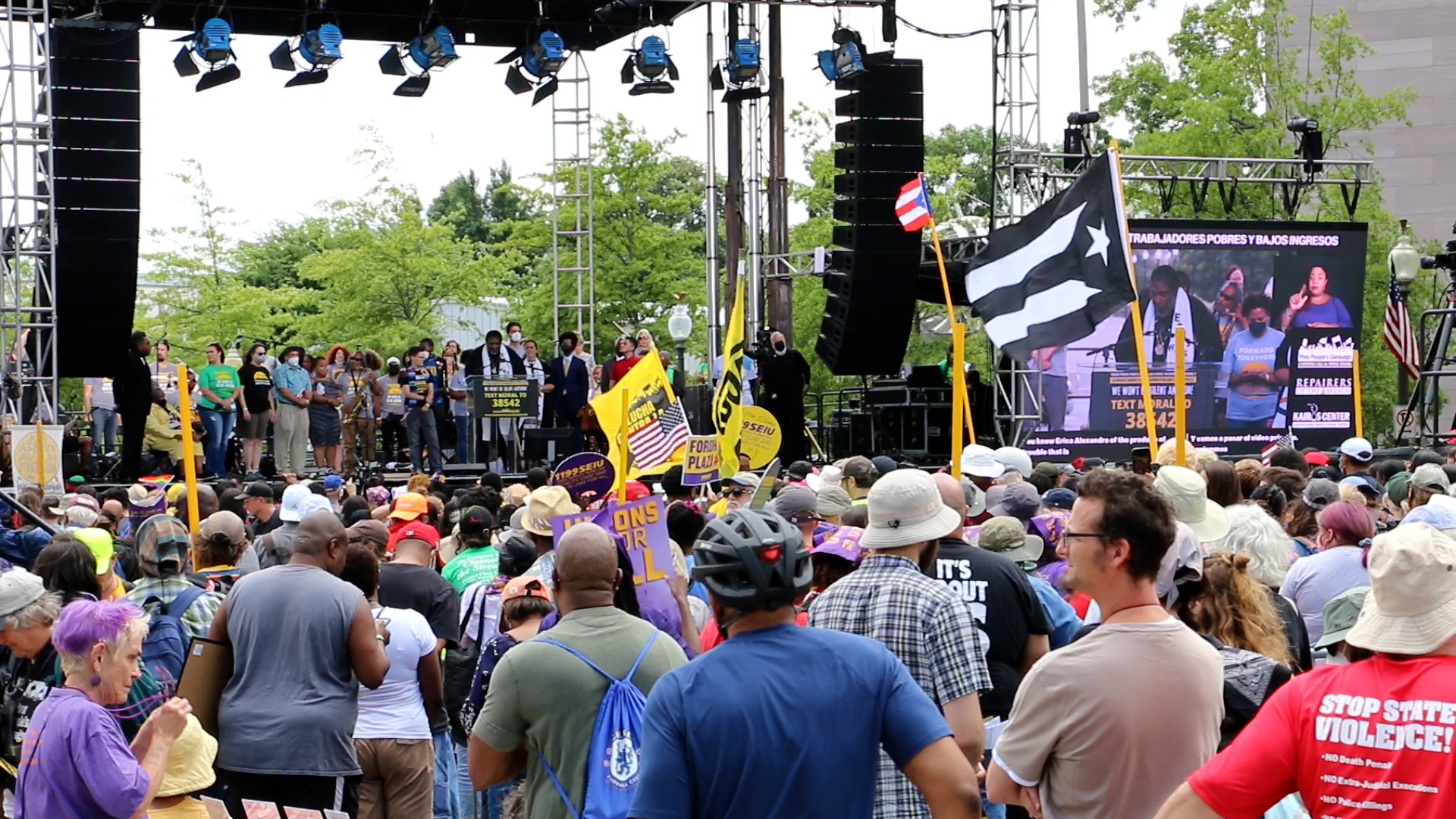 That message was reinforced by co-chair Reverend Liz Theo Harris when she said, "Hope comes from the bottom. We will transform this nation from the bottom up."

Later, Bernice King, daughter of the late Dr. Martin Luther King, Jr., declared that poverty is violence, and that our nation doesn't suffer from a deficit of resources, but a deficit of will. Stating that poverty is not someone else's problem, that the least of these is becoming the most of these, and poverty will not stop at low-income workers. Poverty is a system that will continue to consume more and more people.

Throughout the day, a blustery wind kept the participants cool, with several speakers commenting that the spirit was moving. While storm clouds threatened briefly to rain out the event, the wind prevailed and brushed away the clouds.

The event ended with singing and with Rev. Barber calling for viewers to join the movement, then he offered an outline of the Poor People's Campaign's plans for non-violent direct action in the halls of Congress in September. As one speaker said, "This isn't the end, it's the beginning."

United Workers leader Father Ty Hullinger gave his thoughts on the mass march from the middle of the action in D.C. on June 18th.  Be sure to subscribe to our YouTube channel for more footage from the ground and other content from the United Workers Media Team! 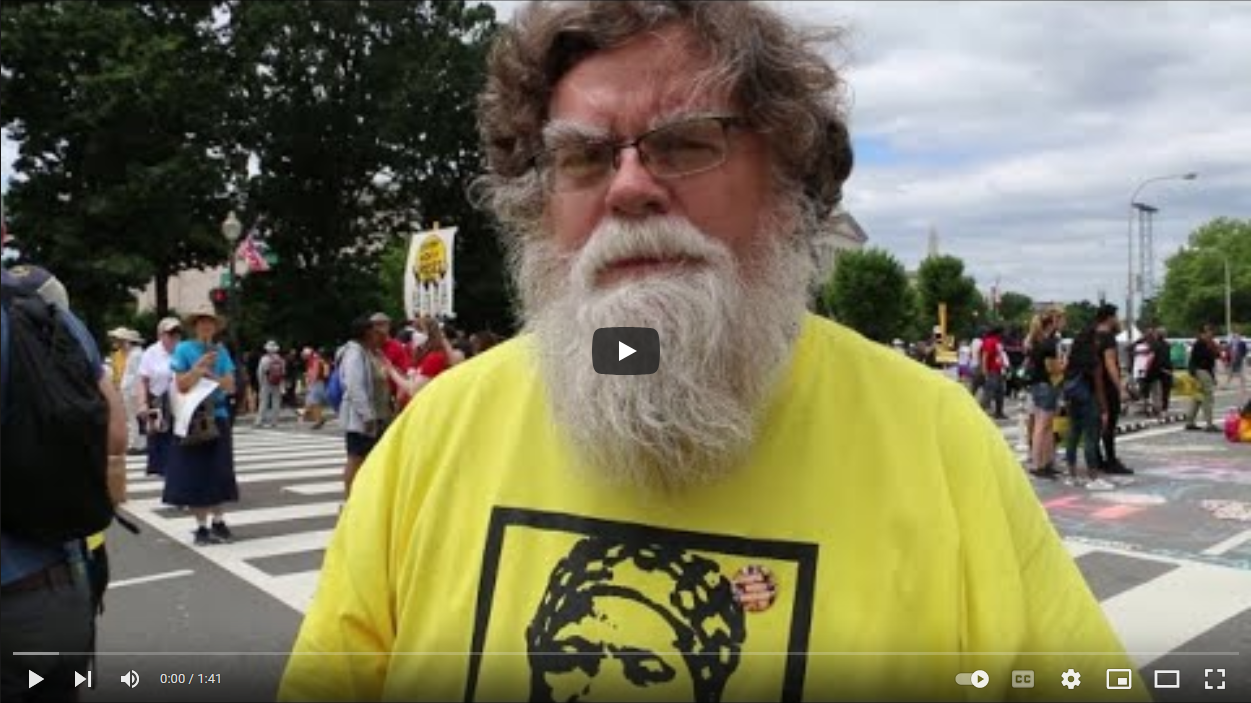 To watch our other videos, please check out our YouTube channel here.

The following is an excerpt from the latest entry in our Learning as we Lead series, documenting the history of United Workers.  To read the full story, or to see the other entries in our series, check out our blog here.

...We drafted our story and learned that if we could take control of the timeline as best we could, we would maximize our resources. When we did things was as important as how we did things or why.

Our strategic plans revolved around a peak organizing period – the baseball season. We wanted media attention, so we planned protests when the media would be most available – in the Spring before students’ summer break and then after Labor Day. During the summer months we would focus all our efforts on organizing workers. To develop new members we developed what we called “Unity Actions” and we held a weekend getaway retreat called the “Staying on Track Retreat”.

In 2004 our first Spring Action was on Opening Day – the time of the baseball season when everyone pays the most attention. The result of this opening day salvo was immediate ongoing talks with the Maryland Stadium Authority who managed the cleaning contract because the stadium was owned by the state. And in a more limited way talks began with Peter Angelos. In fact even before our first protest Angelos had reached out, having heard from labor unions about our planned opening day march from the shelter down Eutaw Street to the main entrance to Camden Yards. Unions had called Angelos apparently to warn him and to avoid being blamed for this seemingly surprise protest. It appeared that our strategy was already bearing fruit - Angelos didn’t want bad publicity on such an important day. So before we even put out a press release or finished our protest signs and banners we - this ragtag group had gotten the attention of Baltimore’s most powerful person.

The dialogues with the Maryland Stadium Authority led to Aramark, the cleaning contractor, losing its contract.  Workers got a raise to $7/hr.

We need to build a mass movement of working class people to end poverty, and we need your help to do it.  If you’d like to support our work by volunteering your time and skills, please reach out to us at [email protected] to get involved in our ongoing campaigns.  You can also support us by clicking the button below and donating to United Workers. Your financial support will contribute to us becoming independently sustained by our base of members, family, and friends.