Since the start of the new year, United Workers has been engaged in our annual strategic planning process. This is an important time of reflection for the organization. We review the work of the last year, draw out lessons learned, and set our priorities for the forthcoming year. Although this is an annual process, this year’s strategic planning is especially significant. For one, we have reached a critical milestone in our organization’s history. This summer will mark our 20 year anniversary as a membership-led human rights organization of the poor and dispossessed in Maryland. From our founding by homeless day laborers in an abandoned firehouse turned homeless shelter to our Living Wages Victory at Camden Yards, from the fight for Fair Development at the Inner Harbor to our multi-issue fights for our human rights to housing, healthcare, and clean air, we have a lot to celebrate, but also a lot to learn from. In recognition of our upcoming anniversary, we’ll be including in our upcoming e-alerts a segment looking back at important moments in United Workers history, starting with the founding of the organization in this edition (see below).

Additionally, this year’s strategic planning process is also significant, because we are envisioning the next phase as a period of “reconnaissance” to help determine our next focal point campaign.

One of the slogans we often say in the United Workers is that the struggle is the school. However, the school extends beyond critically reflecting on our past struggles. We are also studying the history of the poor organizing the poor, and lessons from contemporaries in the movement to end poverty today. Reflecting together on the struggle is how we grow as leaders in our movement led by the poor to end poverty.

Though the usual activity of the organization continues, we have been scheduling time twice a week to meet as a collective and talk about the work, past and future. These deep discussions are about more than our plans for the year- they’re an opportunity for political education and developing strategic unity. We are incredibly grateful to those fellow organizers who have joined us thus far in these conversations. These guests have included our own emeritus Leadership Council member Willie Baptist, Nijmie Dzurinko and Phil Wider from Put People First! PA, and Sarah Weintraub of Vermont Workers’ Center and the WI Poor People’s Campaign. They’ve generously shared their insights on strategies for leadership development, challenges and setbacks they’ve overcome, and ways to think more critically about the work we’re doing.

This upcoming year will be a “year of reconnaissance” for United Workers. We will focus on research and education as we develop our next campaign. As Willie Baptist teaches us, you cannot correctly identify the solution if you cannot correctly identify the problem. We are not fighting for moderate reforms or crumbs from the table of the ruling class. We are fighting to end poverty, to attack it at the roots and change the system that produces it. To do this, we need to understand that system. Over the next period, we’ll be engaged in an intentional listening and research process to determine a focal point campaign- one that unites poor people across Maryland, and one that builds upon what we’ve discovered so far in 20 years of learning as we lead.

Part I: The Founding Years

Watch a video from our archives: “United Workers Founding Years”

United Workers’ history began with asking questions- Why are we working so hard but still living on the street? What has happened to the economy that has kept our wages low and our basic survival needs unmet? Can we unite homeless brothers and sisters around these questions, reach a better understanding of our circumstances and the powers-that-be that are oppressing us, and do something about it?

This video clip from our early days showcases two important aspects of the organization that have been central to our work since the beginning. First, United Workers comes out of a history of organizing among the poor and dispossessed - particularly the National Union of the Homeless movement of the 1980s and 1990s. Willie Baptist, featured in the video, was an educator and organizer with the Union of the Homeless during that time period. His emphasis on collective study and being about to develop ourselves so that we might outsmart our opponents comes from the lessons of that period - where people with little in the way of money or other resources were able to use their intelligence and resourcefulness to outsmart who and what they were up against. The connections to Willie Baptist (now an emeritus board member of United Workers) and others were instrumental in our formation and ability to stick and stay.

Secondly, the video shows the emphasis we placed on leadership development and study. During this period in 2002-2004, we largely centered our work around two precious hours at the Eutaw Street homeless shelter. The abandoned firehouse turned small shelter afforded us a time and place to study. We started out organizing day laborers who would work all over Baltimore at some of the most powerful institutions in the city. We studied how this work was organized, compared notes on the worst and best jobs, saw how we were being divided by race and gender, and dug into the question of who is benefiting from this system, what did we see as weaknesses that we may be able to exploit and where were our leverage points as day laborers who were hired and fired every day. This was an active process that would continue when we left the shelter. Our outreach to workers as seen in the video was a central way we began to formulate and test our analysis. It was through this theory and practice that we developed and launch our first campaign - the Living Wages Campaign at Camden Yards, where we would organize the hundreds of day laborers who cleaned the stadium during and after home games. 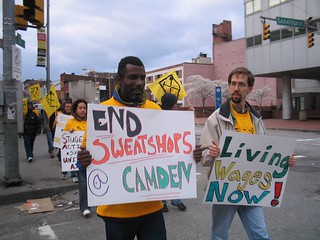 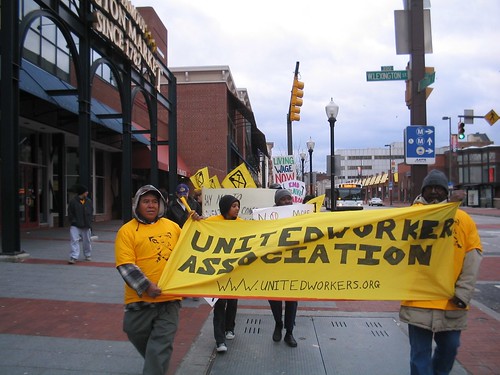 United Workers launched our first campaign in 2004 with a protest march to Camden Yards.

Register for the Poor People's Campaign Moral March on Washington!

The June 18, 2022 Mass Poor People's & Low-Wage Workers' Assembly & Moral March on Washington and to the Polls will be a generationally transformative and disruptive gathering of poor and low-wealth people, state leaders, faith communities, moral allies, unions, and partnering organizations. Click here to learn more and register!

We need to build a mass movement of working class people to end poverty, and we need your help to do it. If you’d like to support our work by volunteering your time and skills, please reach out to us at [email protected] to get involved in our ongoing campaigns. You can also support us by clicking the button below and donating to United Workers. Your financial support will contribute to us becoming independently sustained by our base of members, family, and friends.