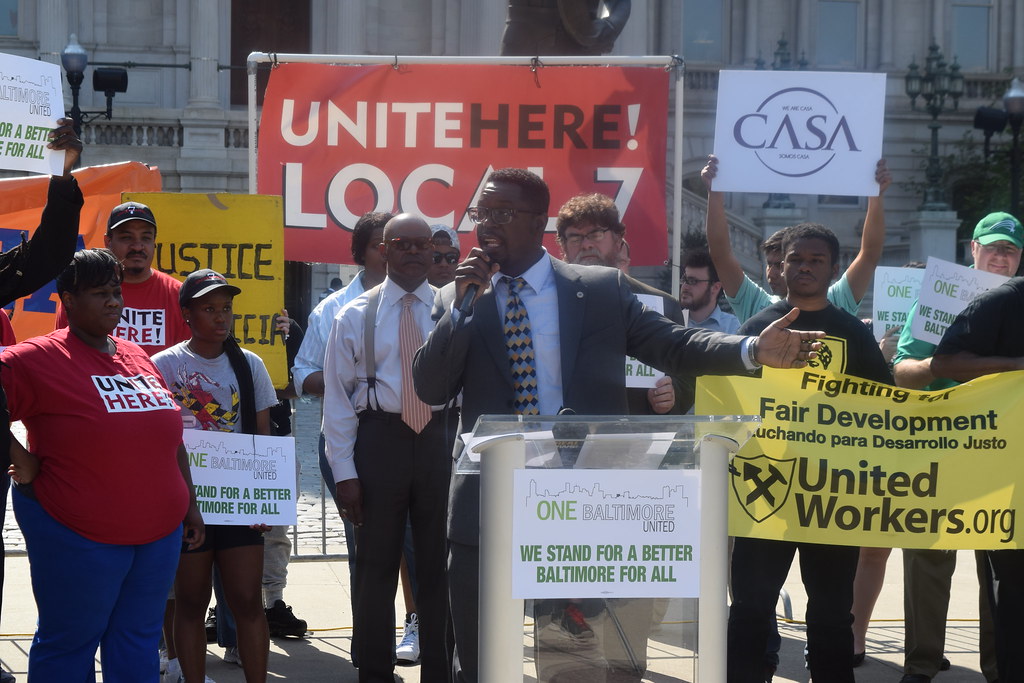 Grassroots leaders of Baltimore’s Human Rights Organization, the United Workers, are calling for dialogue and reconciliation with neighbors and city policy makers to address the systemic racism and poverty that has plagued the City for 40 years and get below the surface of this evolving and troubling crisis in our city.

Why do 40,000 properties sit vacant while 4,000 are homeless, and another 154,000 face foreclosure and eviction annually?  Why do 62% of job seekers report that they are unable to find a job that offers a living wage, and almost one in four cited their own criminal histories as a barrier to employment?  Why do we utilize economic development subsidies to downtown developers that result in less tax revenue for city schools?  Why does our Mayor champion a toxic trash burning incinerator project for Southwest Baltimore, already home to dangerous levels of lead, mercury and other toxic pollutants?  And why after 16 days is there still no answer to the question why was Freddie Gray arrested or how is spine was broken?

“We must resolve this crisis with reconciliation, with a new and greater commitment to secure economic justice for all of Baltimore. There will be reaction and backlash when what is needed is for all of us to take a step towards each other and come to terms with the crisis of inequality that has brought our city to this moment” commented United Workers Leader Michael Coleman.

Mayor Stephanie Rawlings-Blake’s policies, which have relied on private housing market speculation and publicly subsidized trickle-down development, have exacerbated the poverty and the hardship of many in Baltimore.  Fire stations, recreation centers and schools have been closed because of budget limitations.  Public Housing has been privatized.   Housing code enforcement in poor communities is virtually non-existent.  Yet, the city has found money to provide private developers with massive economic subsidies.  It also has funded a police department so unaccountable that it cannot even determine, after 16 days of investigation, why Freddie Gray was arrested, much less brutalized.   The past few weeks should be viewed as a referendum on the Mayor’s failed leadership.

United Workers’ Fair Development Campaign launched in 2008 and led by workers from the Inner Harbor and Camden Yards as well as neighborhoods in West and East Baltimore have called on city leaders to use development resources to further community-driven policies such as affordable housing trusts, universal health care, economic development targeted to create living wage jobs, and sustainable and equitable energy and waste solutions.   Neighborhoods deemed by the City to be beyond help have fought to take back vacant property and create permanently affordable housing through Community Land Trusts; community leaders in Curtis Bay have fought the siting of what would be the nation’s largest trash burning incinerator within a mile of the Benjamin Franklin High School; and workers have fought and won union rights at such developments as the Inner Harbor Caesars Casino.   In each arena, communities have struggled to get the attention and support of city leaders.

“Our communities have dignity. When we see our human rights being violated we have acted and will continue to push for our rights to be secured – the rights to breath clean air, have access to safe and affordable housing and a job with dignity” explained United Workers youth leader, Destiny Watford.

The United Workers is working for a new human rights economy.  One where civil rights are respected and economic rights, such as health care, education, housing, and work with dignity are fulfilled.  The time for holding the police department accountable for Freddie Gray’s death is long past, as is the time for abandoning the city’s trickle down approach to economic and community development.  We must now envision and advance new community institutions, forms of community participation, and community wealth.  A major municipal bond that puts communities to work rehabilitating vacant housing and controlling development in their own neighborhoods is the first step in this vision.  We call on public leaders to join us in community discussions of these and other policy options.

Additionally, the United Workers and its citywide network of human rights committees will be hosting walks for economic justice, and human rights discussions to ensure that city leaders and communities go deeper below the surface of the looting and riots and to find paths towards economic justice and reconciliation.