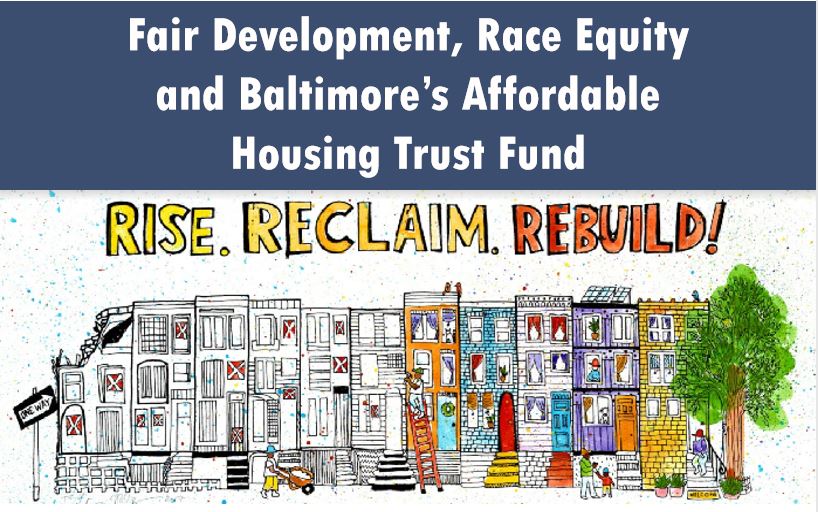 The Fair Development Roundtable, members of the Affordable Housing Trust Fund Commission and national experts are releasing recommendations for how the fund will allocate and monitor its resources. The report titled “Fair Development, Race Equity and Baltimore’s Affordable Housing Trust Fund” includes 8 thresholds as core mandates on where and how Baltimore must address racial and economic equity, align with best practices for affordable housing including permanently affordable housing and community ownership, and advance opportunities for local employment and environmental sustainability.

“These thresholds are designed to make Baltimore a leader in addressing the racial wealth gap. Currently one-third of residents of color have virtually zero net worth. These criteria require permanent affordable housing and community ownership. We want to utilize best practices for development without displacement and mitigate against changes in the housing market,” commented Commissioner Iletha Joynes.

“We haven’t gotten this far by waiting around for the city to take action,” said Commissioner Vernadine Kimball, who herself collected more than 2,000 petition signatures from registered voters to put funding the Trust Fund on the ballot last year. “This is the people’s fund. We created it and made sure that there was funding for it. We have a vision to make sure this funding is addressing real needs coming from the community.”

Residents recognized the challenge of pushing the city to commit resources to develop disinvested communities without displacing low income residents. Concerned that DHCD and City Leadership would continue the “status quo” for development, five commissioners, residents, and community leaders have been meeting with industry leaders and experts for the past 6 months to develop a scoring matrix that mandates best practices for affordable housing development, including:

“I live at Bolton House- we are fighting against the clock right now with our building’s affordability running out. We as residents have no idea if we’ll get to stay or if our building will go to market rate. As a trust fund commissioner I am going to make sure we invest in permanently affordable housing solutions.” -Commissioner Tisha Guthrie

Commissioners are concerned that they and the public who created the Fund will not be heard and that DHCD will not take seriously the deliberative process. Almost two full years after the creation of Baltimore’s Affordable Housing Trust Fund by an amendment to the city charter, its Commission convened for the first time in May 2019. In both the May and June Commission Meetings, Department of Housing and Community Development staffers have expressed urgency around drafting a Notice of Funding Availability and starting to accept proposals in early Fall. Commissioners publicly expressed frustration that they have not had any opportunity for meaningful participation in the process. When commissioner Iletha Joynes voiced these concerns, a DHCD staffer’s response was “we will share it with you when it is finished.” The fund is expected to have $17 million in revenue allocated this 2019-2020 fiscal year, although no official report has been given by the city Finance Department on the money currently in the fund.

Last year, former Mayor Catherine Pugh, and former Council President “Jack” Young and Housing Committee Chairman John Bullock reached an historic agreement with the Baltimore Housing Roundtable and Housing for All Coalition to drastically increase the city’s funding of affordable housing. The agreement declared that within the next 5 years the City will allocate at least $20 million annually to the Affordable Housing Trust Fund. The Trust Fund was funded through a combination of legislation from the City Council creating a surtax on the transfer and recordation of property sales over $1 million and capital improvement bonds.

Key provisions in the agreement included:

This agreement was memorialized in a Memorandum of Understanding at a mayoral press conference and celebration last Fall.

Residents developed community ownership of land through land trusts – hundreds of community members envision a new Baltimore where neighborhoods are not disrupted by systemic neglect or involuntary displacement. Close to 1,000 city residents have donated to community land trusts over the last two years, raising more than $100,000 to subsidize affordable housing projects in East and South Baltimore. Residents in North East are reclaiming vacant homes for redevelopment and new homeownership opportunities. In Curtis Bay youth leaders are reclaiming vacant lots, transforming dumping sites into gardens, and creating a performance space along with affordable homeownership opportunities.